The First look at Laser Cutting and Engraving

Lasers are used in many industries to treat people, detect motion and manufacture products. Computer controlled laser cutting and engraving machines become a convenient way to create industrial and consumer products like signs, badges, gears, e t.c. With great similarities, there are different processes which laser CNCs can perform to meet the production needs.

Laser Cutting is a process of manufacturing parts by directing a laser beam onto the material to cut out a geometry required. The laser is focused on material with the help of optics and computer code to melt or burn the exes from a flat sheet or piping of a material.

Laser Engraving is a process that is close to laser marking - the laser in these machines is used not to cut the material but just to remove a top layer (or a few) to leave the details on the surface.

Lasers are also capable of engraving the color into a material. Usually, the process is referred to as laser marking, which allows oxidizing the material until it changes the color to a specific one. By controlling the length of a laser wave and speed, material type and surface finish, many colors can be achieved.

Alternative methods include creating a cavity on the acrylics, putting a dye and engraving the surface again with lower power and higher speed to melt the dye into a workpiece.

How does laser cutting machine work?

Laser cutting process is better to be described as melting because what the laser beam does is melts or evaporates the extra material, which you don’t need on the workpiece.

The laser beam is generated in the resonator. It can be directed by mirrors or beam benders through the nozzle, which also has a compressed gas such as oxygen or nitrogen blowing. Then a special lense in the cutting head focuses the laser beam on the plate to have a precise and concentrated density in the focus spot. 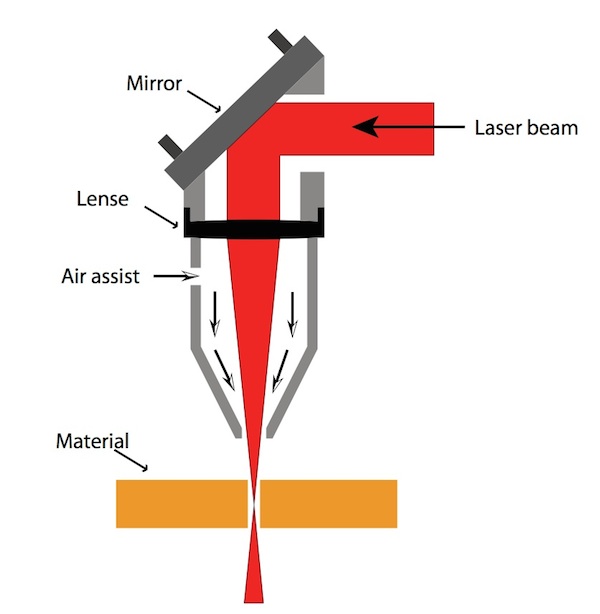 Depending on the length of a laser wave, heat output, intensity and the power of the source at first place, the machine can work with various materials and deliver various effects which you are looking for.

Less powerful lasers are used for fabric, leather, paper and other delicate materials to avoid overheating them, while gemstones, metals and thicker workpieces would require a higher power to cut.

Aside from the power difference, a laser can be of a different type. The CO2 laser is one of the most common ones - it uses dioxide mixture, which is electrically stimulated. This method isn't completely risk-free since the electrodes inside a cavity can face an electrode erosion. Modern CO2 lasers use radio frequency energy instead of the electrodes.

Nd: YAG Lasers are unlike CO2 ones use crystals and laser diodes or flashlamps to pump the beams, which results in larger capabilities of a cutter. Therefore, these crystal lasers are commonly used in welding, industrial cutting, and manufacturing.

Fiberglass type laser uses a "seed laser" that is amplified by glass fibers and diodes. This type is much stronger compared to CO2, and it can be used on both metal and non-metal materials.

What is the advantage of a laser cutting machine?

What are the most popular products to laser engrave?

Laser engraving is used widely in gifts and awards industry - custom text on the items can be made easily by a laser without damaging the product. A laser also can engrave more complicated images like photos on various materials and surfaces, which makes it a great tool in gift and decoration industry. Therefore, laser cut wedding invitations or signs are quite popular nowadays.

Lasers are also used widely in the aerospace, automotive, electronics, semiconductor, and medical industries. Lasers are great in cutting silicone and ceramics, which has applications in civil and medical spheres.